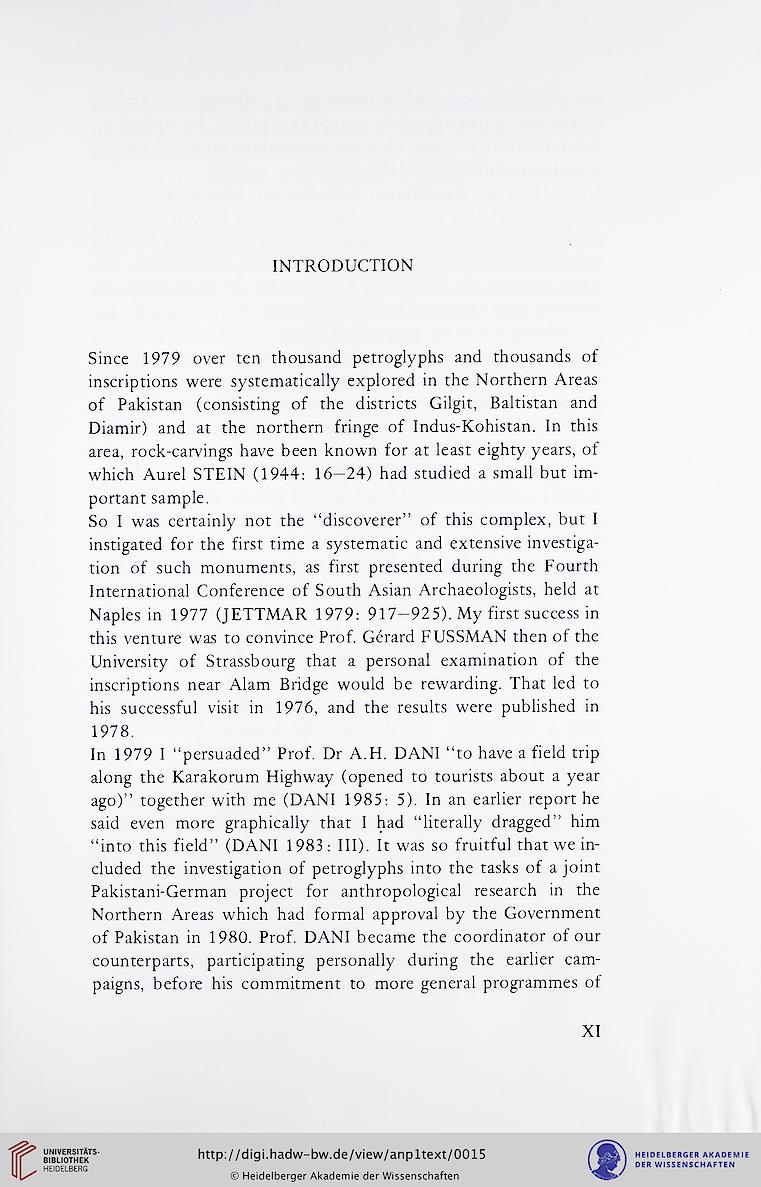 Since 1979 over ten thousand petroglyphs and thousands of
inscriptions were systematically explored in the Northern Areas
of Pakistan (consisting of the districts Gilgit, Baltistan and
Diamir) and at the northern fringe of Indus-Kohistan. In this
area, rock-carvings have been known for at least eighty years, of
which Aurel STEIN (1944: 16—24) had studied a small but im-
portant sample.
So I was certainly not the "discoverer" of this complex, but I
instigated for the first time a systematic and extensive investiga-
tion of such monuments, as first presented during the Fourth
International Conference of South Asian Archaeologists, held at
Naples in 1977 (JETTMAR 1979: 917—925). My first success in
this venture was to convince Prof. Gerard FUSSMAN then of the
University of Strassbourg that a personal examination of the
inscriptions near Alam Bridge would be rewarding. That led to
his successful visit in 1976, and the results were published in
1978.
In 1979 I "persuaded" Prof. Dr A.FI. DANI "to have a field trip
along the Karakorum Highway (opened to tourists about a year
ago)" together with me (DANI 1985: 5). In an earlier report he
said even more graphically that I had "literally dragged" him
"into this field" (DANI 1983: III). It was so fruitful that we in-
cluded the investigation of petroglyphs into the tasks of a joint
Pakistani-German project for anthropological research in the
Northern Areas which had formal approval by the Government
of Pakistan in 1980. Prof. DANI became the coordinator of our
counterparts, participating personally during the earlier cam-
paigns, before his commitment to more general programmes of